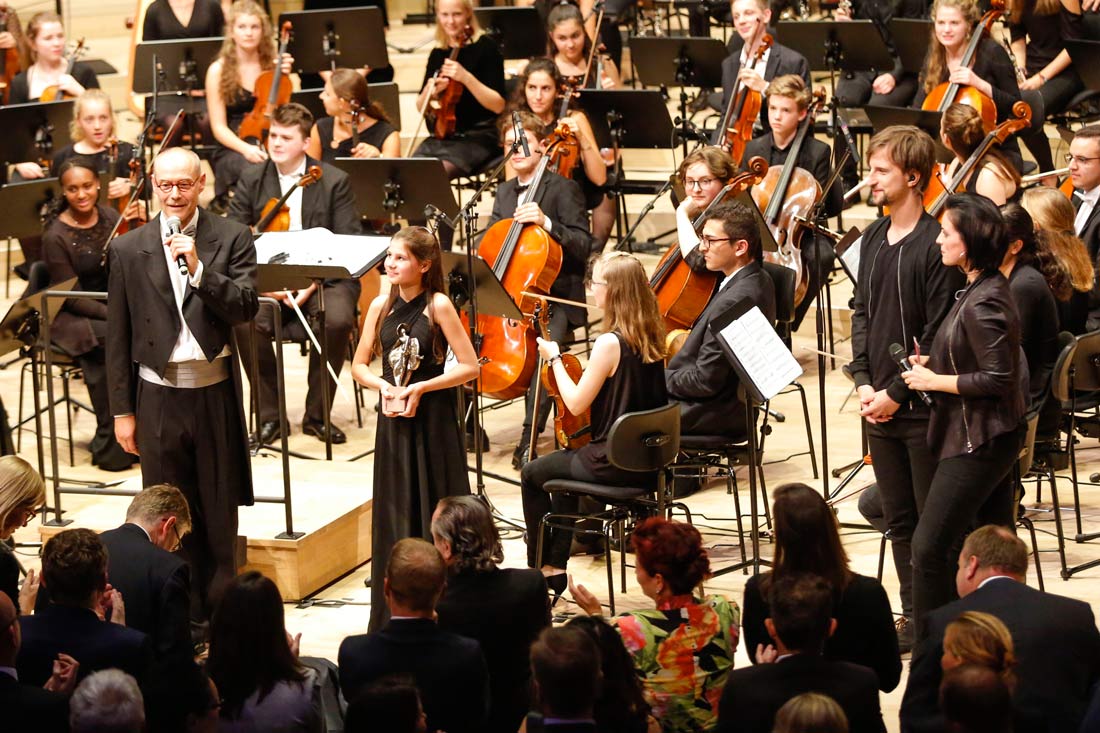 Standing ovations in the sold-out hall of the Elbphilharmonie. On October 3rd, the Felix Mendelssohn Youth Symphony Orchestra was awarded the European Youth Award 2017 in Hamburg. Prof. Clemens Malich, conductor and director of the ensemble, was delighted with the award and said: “It is a very special honor for us to receive such an honor.”
Nane Schulz, the youngest member of the orchestra, thanked for the “beautiful concert”. With over 100 members aged between ten and 27, the ensemble is now one of the largest and most successful of its kind in Germany. Since its foundation in 1974 the young musicians have played in many European countries. In addition to the award sculpture TAURUS, they received a grant of 12,000 euros, which will be used for a concert tour to France next year.
A special moment for the young orchestra: the performance with SILBERMOND. Between the titles “B 96” and “Leichtes Gepäck”, which sounded completely rearranged in classical dress, front woman Stefanie Kloß gave an emotional laudation. “You have such great energy, it is simply contagious”, she called out to the young musicians. “If I were young and saw you, my career aspiration would be clear: musician.” The title “B 96”, which refers to the federal highway 96 – which leads from Zittau in the eastern part of Upper Lusatia to Sassnitz on the island of Rügen – is a very personal homage to the band’s home country. And probably nothing could be more fitting for the Day of German Unity.
However, the reason for this special evening in the Elbe Philharmonic Hall was the 30-year town twinning between Dresden and Hamburg. Reason enough for Dresden’s Lord Mayor Dirk Hilbert to be present on this day. And another prominent representative represented the Saxon state capital: the cellist and director of the Dresden Music Festival Jan Vogler played together with the Felix Mendelssohn Youth Symphony Orchestra. “I am delighted to play with the young musicians of the Felix Mendelssohn Youth Symphony Orchestra and congratulate the young musicians on receiving this award,” said Jan Vogler.
The world-famous music star also brought very special guests with him to the north: the Dresden Festival Orchestra he founded under the direction of Josep Caballé Domenech. Like the orchestra, the Barcelona-born conductor carries the European idea through many countries. He has made guest appearances with orchestras such as the Royal Philharmonic Orchestra London, the Tonhalle Orchestra Zurich, the Symphony Orchestra of WDR Cologne, the Swedish Radio Symphony Orchestra, the Stockholm Philharmonic and the Czech Philharmonic.
Six young music ambassadors – also from Dresden – presented themselves from the rank. The Ensemble ECHO, consisting of six former Crucians, enthused in the sold-out Elbphilharmonie. This group as well as the award-winning orchestra represent one of the main concerns of the European Cultural Forum.
On the initiative of the founding president of the European Cultural Foundation Pro Europa, Dr. Ernst Seidel, the European Cultural Forum 2011 was founded in Dresden. “We are very much aware that the promotion of young talent must play a major role in today’s world,” says Sigrid Kühnemann, Chair of the European Cultural Forum. “It is precisely this task that we take on again and again. After all, we are laying the foundation for sustainable development. And Sigrid Kühnemann knows what significance such activities have. For the reconstruction of the Dresden Frauenkirche, the circle of friends in Celle, founded by her and her husband, donated Pillar B, one of six supporting regular pillars of the Dresden Frauenkirche.