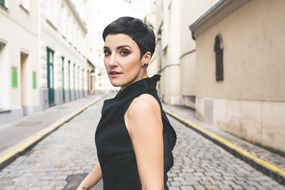 High-flyer, furor fee, exceptional artist – hardly any attribute is too big to not fit on Ina Regen. The Austrian singer-songwriter will perform at the European Cultural Awards Gala on October 20 at the Vienna State Opera.

Not only the big names of classical music will meet on this evening, but also the bridge-builder between the musical worlds, who is rightly very proud of her debut at the high house: “A performance at the Vienna State Opera is tantamount to a knighthood for me. I feel very honored and look forward to playing on this world-class stage on the occasion of the presentation of the European Cultural Award.”
In 2018, the 34-year-old took hearts by storm in Austria with her debut single “Wie a Kind” and was even nominated for Song of the Year. Only a few months earlier, Ina Regen had put her song on the Internet as a music video: Without a record company and without expensive marketing, she landed on number 1 on iTunes and reached almost two million streams on YouTube. With her original Austrian lyrics, she has since then hit the nerve of the audience and thus confronts the small and big questions of life. Her current album “Klee” has reached No. 1 in Austria and has been awarded Gold and the Amadeus Austrian Music Award for “Album of the Year”. The top-class European Cultural Awards Gala is presented by HALLMANN HOLDING International Investment GmbH.