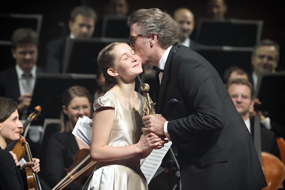 Promoting young talent, for Thomas Hampson a matter of the heart

His life’s work is an example of what passion can achieve. His successes around the world have never stopped Thomas Hampson from thinking about the next generation. One example is the “Heidelberger Frühling”, a song academy. Thomas Hampson regularly passes on his experience to young singers, training them above all in the often-neglected cultural asset song.  “It is very fulfilling and beneficial to help young colleagues to gain an insight. I am addicted to these aha-moments,” says the 64-year-old.
Chamber singer Thomas Hampson insisted on presenting the European Young Talent Award 2019 to the exceptional young artist Alma Deutscher in person. The two have already appeared on stage together on several occasions, soon also at Carnegie Hall in New York.
Alma Deutscher has been composing since her earliest childhood days and acts as a cultural ambassador for Europe. Her first opera “Cinderella” in a special version was celebrated in Vienna in 2016 under the patronage of Maestro Zubin Mehta with standing ovations and international applause. The English language premiere took place in December 2017 in San José (California) and in January 2018 a special version for children was performed at the Vienna State Opera. Here, at the gala for the presentation of the European Cultural Awards, tradition is combined with an outstanding modernity. The appreciation of the established Viennese house for a “youth star” and thus the unifying effect of classical music between the generations is evident here.