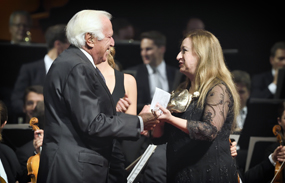 Brilliant orchestral power thanks to a woman

Simone Young, who made her debut at the traditional house in 1993, stood on the conductor’s podium that evening.  A performance that was decisive for her career, said Ioan Holender, who brought her to the State Opera. He has known Simone Young for a very long time, traced her life, honored her as the first woman at the Vienna State Opera, told the audience that he also held her extraordinary piano talent in high esteem, and on this evening he insisted on presenting Simone Young with the European Cultural Award. With the orchestra of the Vienna State Opera she played a leading role in the extensive program. Works by Mozart, Wagner, Verdi and Beethoven were heard.