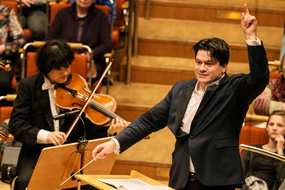 In 2020 Europe will celebrate the 250th birthday of the famous composer, citizen of Bonn, musician, humanist, visionary and nature lover – Ludwig van Beethoven. To mark this occasion, the European Cultural Awards will be presented on 3 October 2020 in a high-profile cultural awards gala at the Bonn Opera. Great personalities are expected to attend this evening, whose extraordinary skill and commitment will make Ludwig van Beethoven’s legacy accessible to all generations.

In cooperation with great conductors, the WDR Symphony Orchestra represents the musical landscape of the WDR broadcasting area on European stages in a special way and is involved in a variety of projects in the areas of music education and the promotion of young talent.

Outstanding productions of 19th-century symphonic music were created under the direction of Gary Bertini, who headed the WDR Symphony Orchestra as its principal conductor from 1983 to 1991 and made the orchestra a leading interpreter of Gustav Mahler’s symphonies. Between 1997 and 2010, numerous award-winning and highly acclaimed productions were created under the direction of Semyon Bychkov, with works by Dmitri Shostakovich, Richard Strauss, Sergei Rachmaninov, Giuseppe Verdi and Richard Wagner. Successful joint tours in Europe, America and Asia make the orchestra an internationally renowned ensemble.

Even before the Beethoven anniversary year 2020, the WDR Symphony Orchestra has set a musical monument to the great composer from Bonn. Under the direction of Jukka-Pekka Saraste, the complete cycle of all nine symphonies by Ludwig van Beethoven was performed with great success. “Beethoven’s significance for universal culture is one of the greatest of all, because his message is felt everywhere. Not only in Europe, it is everywhere. A message of strength, of humanity – and it also tells of the importance of human culture,” conductor Jukka-Pekka Saraste said about his encounter with Beethoven.