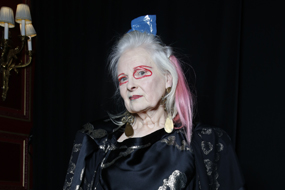 British fashion designer Vivienne Westwood will be awarded the European Cultural Award for Social Commitment at the Vienna State Opera on 20 October 2019. The award recognises her commitment to human rights, the environment and social issues as well as her influence on design and culture.

Hardly any other woman in the fashion world uses her work as much as Vivienne Westwood to transport messages. For her, sustainability is one of the basic virtues that should be observed in all areas of life – especially when it comes to dispensing with disposable clothing and observing fair production conditions. For decades Vivienne Westwood has been one of the most creative and trend-setting designers in Europe. Vivienne Westwood will accept the award in person on 20 October 2019 at the European Cultural Awards Gala. The top-class European Cultural Awards Gala will be presented by HALLMANN HOLDING International Investment GmbH.