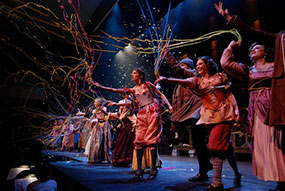 The current EU cultural funding program “CREATIVE EUROPE” (2014- 2020) promotes the mobility of creative productions and European cultural workers in the fields of music, film, theatre, media and literature across national borders. It builds on the success of previous cultural funding programs and is intended to provide both financial and non-material support to well over 200,000 artists and cultural players as well as numerous small and medium-sized enterprises.

On 19.11.2013 the new cultural funding program “CREATIVE EUROPE” was adopted by the European Parliament. The program creates supra-regional networks and corporations that support the dissemination of artistic works and thus contribute to the sustainable development of new markets and audiences. In addition to international cooperation, platforms, literary translations and the revised MEDIA sub-program are further key elements of the support program.

“CREATIVE EUROPE” promotes artistic competence and further education by offering new perspectives on European neighbors. In total, the program aims to reach more than 250,000 cross-disciplinary creative actors. A budget of around 1.46 billion euros is available for this purpose. Numerous transcultural projects that pave the way for infrastructural networking in the fields of society, art, politics and research will benefit from the financial support.

The aim is to give disadvantaged groups access to cultural productions and to demonstrate the common potential of education, multilingualism and diversity, but also common traditions. The program places particular emphasis on young artists who will preserve this common heritage in the long term. The targeted use of digital technologies is part of this. In this context, creative young people serve as multipliers of historical and creative capital in Europe and beyond. A further priority is the long-term integration of young artists into the national and international labor market. The program also promotes intercultural and political dialogue and thus the cohesion of European citizens among themselves.
“Culture” as another common currency creates identity, strengthens the competitiveness of the European creative sector, creates jobs and thus promotes Europe’s social and economic growth in the long term.